We recently completed a move for the Sawyer family into a house in downtown Durham. The patriarch of the family is a long time customer of Ladd Moving. Jon hired Ladd Moving in 2009 when he was in his senior year at UNC. He needed help moving his piano and other belongings to a house in Raleigh, where he would be attending graduate school at NC State. This is only about 35 miles, but it’s mostly highways, and he was worried his piano would get somehow harmed in the process of loading, unloading, or transport. He explained that the upright piano was a Steinway, and it had been a gift from his grandmother. Ladd Moving sent our most experienced piano movers, and we used our special techniques to meticulously move the instrument and the rest of his belongings.

When Jon was moving again a few years later, he didn’t hesitate to call Ladd Moving to help with his move. In 2013, we moved the same piano to Durham. This time, we incorrectly assumed that this was the last time we would be moving Jon and his awesome piano! Jon recommended us to a number of his friends throughout the triangle area, and he even called us once to help him move the instrument to a different room. When we heard that Jon and his family would need help moving into a larger house in August, we were thrilled to once again help Jon during the stressful process of packing and moving.

Ladd Moving strives to provide reliable, trustworthy moving services to all of our customers throughout the Triangle area. We understand that moving can be stressful, especially for a student or family transitioning into their first home. With over 100 years of experience with projects of all types, Ladd Moving can help you with your move. Call us today at (919) 596-2469.

A little history of Ladd Moving

Since the early 1880s, our family has owned and operated ‘J.E. Ladd & Son Transfer’. During this time, five generations of the Ladd family have ran the daily business operations, and the business has been passed down from one generation to the next. Our reputation as an excellent moving service proceeds us, though we want you to understand that we didn’t gain this reputation overnight – we built our family business over many years and many projects, and we pride ourselves on the hard work that got us where we are today. We previously wrote about our specialization of moving pianos and large instruments, though ’J.E. Ladd & Son Transfer’ brings a high level of experience to help with any move.

‘J. E. Ladd & Son Transfer’ is known as one of the longest continuously operated family businesses in the Triangle Area. As a primarily family owned and operated business, there has been no noticeable change in our standard of providing excellent moving services since opening our doors. Our founder, J. E. Ladd, set this high standard when he started picking up new residents at the train station with a horse and wagon in 1882. Our family has worked to adapt our founder’s high standard of providing quality professional moving services to today’s world. As a continuously operating family business passed down amongst generations, the older generations have also been able to share their knowledge with the younger generations. Moving is truly a family business for us.

‘J. E. Ladd & Son Transfer’ is the professional moving service for any project. We have a history for moving generations of Triangle Area residents. A previous blog post mentions pianos, because they are a difficult to move object for a number of reasons. Though we are frequently hired to move these items because they are large, this also speaks to our ability to handle delicate items, and antiques. Over the years, our family has moved countless fragile items, family heirlooms, and antiques. We handle these projects with special care. J. E. Ladd & Son Transfer’ cares about providing excellent professional moving services, so call us at (919) 596-2469 for help with any move.

A long overdue post about Ladd Moving and our love for pianos.

At Ladd Moving, we consider ourselves to be piano and large instrument moving experts. We know how to keep your instrument safe during a move, whether it’s to a new room in your house or to a new city. Because we have been in the moving business for years, we know that any move with a piano or other large instrument can be both a cumbersome and delicate project.

Most pianos can produce large range of sound, and because of all of the internal moving complexities, any minor bump can cause a change in these sounds. Most instruments have to be tuned following a move – while we cannot guarantee that your piano won’t have to be tuned, we can guarantee that we will minimize the stress your instrument will endure during this process. Ladd Moving utilizes special equipment and strategies to minimize the disruption a piano may endure during a typical move. Of course, our special moving process can still prove to be very difficult – especially considering the weight of a typical piano or other large instrument.

Luckily, the size of these projects doesn’t phase us, as we have generations of experience moving instruments of all sizes – including upright, concert, and concert grand pianos! In fact, we have been Duke University’s chosen piano and musical instrument movers for generations! While Ladd Moving is qualified for any moving projects, we consider ourselves to be especially qualified for piano and large instrument moving.

Our Senior Employee on Our New Truck

Edna Earle (Ladd) Burrage was raised by the founder of our company and her grandfather, J.E. Ladd Sr.  In the photo, the top two quilts on the stack of furniture pads to her left were handmade by her grandmother Fannie Ladd.  When Edna Earle was just a young girl she would play under the large quilting frame while up to ten friends and neighbors stitched away at the “quilting party” as she described it.  Tonight she pointed to patches in the quilts “I remember having a dress made out of that material.”  At 88 years, Edna Earle (and the quilts) are still going strong!  In fact, we are considering bringing Edna Earle out of retirement to move furniture for us.  I told her to report to work in the morning at 9am.  “I’ll be there…with muscles!”

Customers still tell me about watching my great grandfather strap a refrigerator onto his back and carry it up a flight of stairs.  One day I might give it a try. For now, three 27 gallon totes are enough for me!

According to the customer, this antique etched glass table is only one of two in the world.  The other one was owned by Wallis Simpson, Dutchess of Windsor, the American Socialite who King Edward VIII (Prince Edward) abdicated his throne in order to marry in  1916.  The glass itself was beautiful, like looking into a golden cloud.

Ladd Transfer Rolls Out The Vote!

As we have for generations, Ladd is in the process of moving the voting booths out to the precincts for the Durham County Board of Elections.  Rodney and Tony are shown ushering the equipment into St. Stephens Episcopal Churh in the Hope Valley neighborhood.  You can reward them for their efforts by taking the time to go out and vote on May 6th!

Ms. Paley and the History of the Mason & Hamlin Grand Piano

Here is a delightful story from one of our customers whose piano we moved. There are also pictures of 3 very handsome movers and a beautiful Mason & Hamlin grand piano! 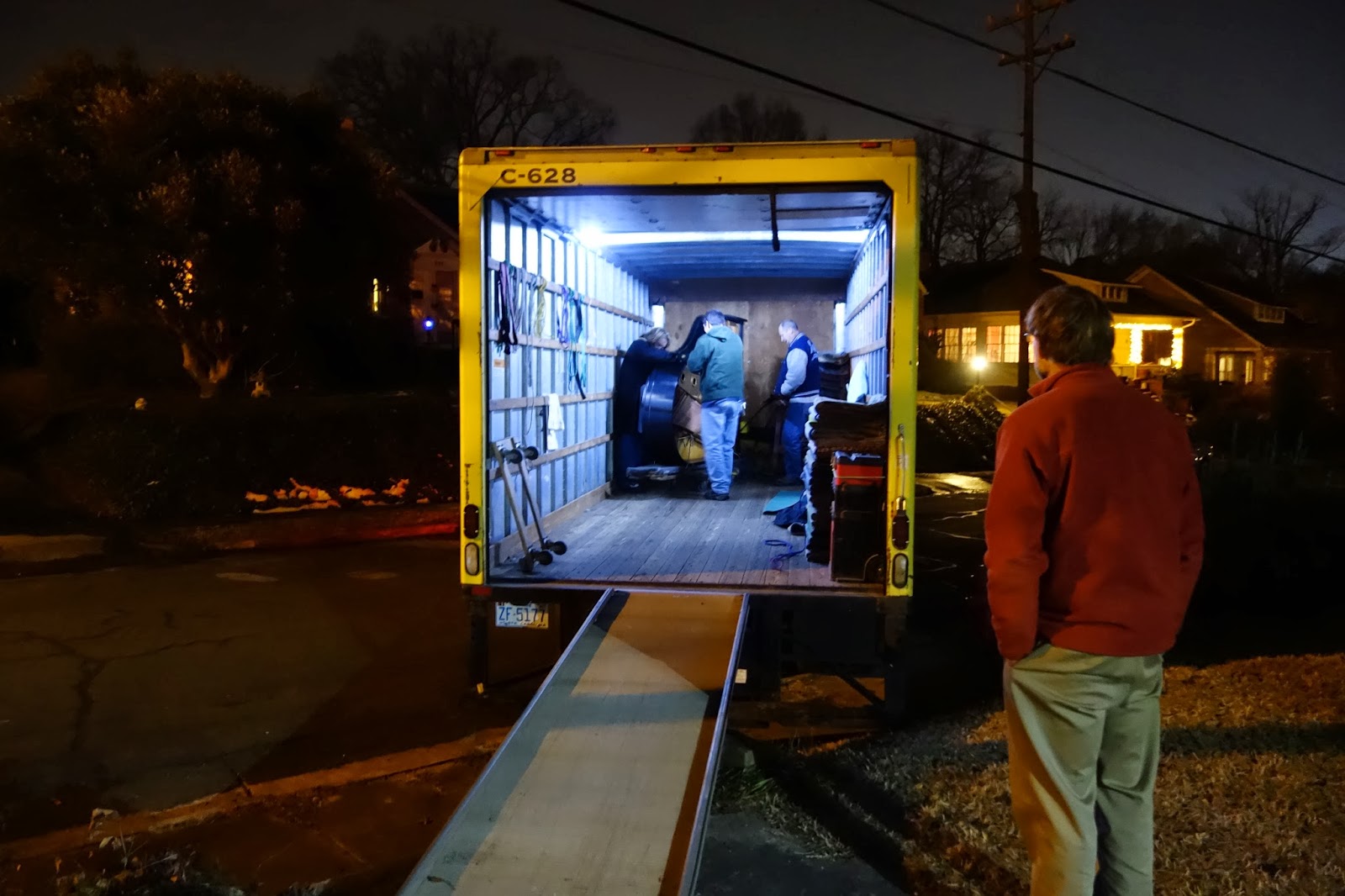 Today we moved Mrs. Berini from her 2 bedroom apartment to one nearly identical just below, except that it had 3 bedrooms.  It was disorienting, fascinating and fun!  Even the furniture was placed exactly as it was upstairs.  I almost expected a bearded evil Mr. Spock to materialize in the room!  My apologies to the folks who are not nerdy enough to get the reference.

Our First Ever Newsprint Ad in 132 years!

This Wednesday’s issue of the Durham Herald Sun is their 125th anniversary commemorative issue. It will also be the very first newsprint advertisement that J.E. Ladd & Son Transfer has ever run! To see our 1/2 page full color ad with all generations of Ladd owners, pick up an issue or download the PDF from their site on Wednesday.  Click on the photo to visit their site.